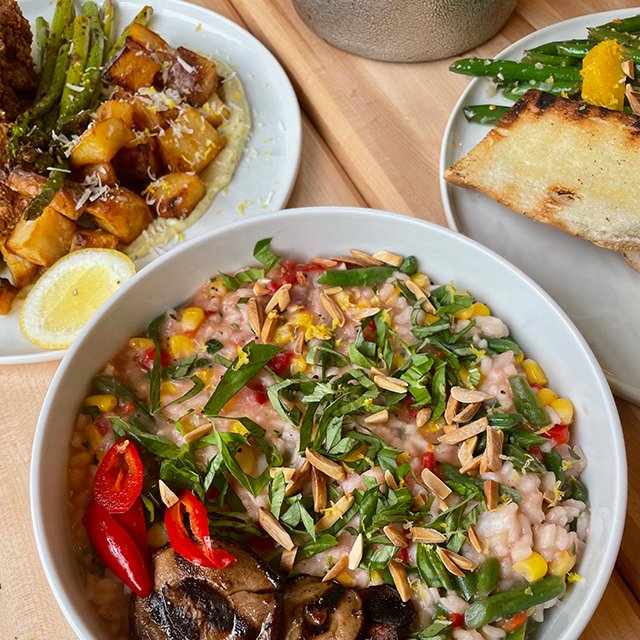 All of the latest and greatest food happenings and events around RVA you may have missed!

Among the fans of local ice cream artisan Rabia Kamara’s cool concoctions? No big deal, just celebrities Kevin Bacon and Ludacris and the brains behind the Ben & Jerry’s empire. The VCU grad and co-owner of the North Side ice cream shop Ruby Scoops recently competed on and won Food Network’s “Ben & Jerry’s: Clash of the Cones” and has her eyes set on more sweet ventures in the future. (Richmond magazine)

Fried chicken is the star of the menu at the newly opened Buttermilk and Honey, a pandemic pivot turned pop-up success and now brick-and-mortar restaurant from husband-and-wife team Mike Lindsey and Kimberly Love-Lindsey. The owners of downtown’s Lillie Pearl and, more recently, Pop’s Market on Grace are giving us serious power couple vibes. (Richmond magazine)

Dog treats, riffs on the sloppy Joe and ZZ Top may not be the first things that come to mind when one thinks of a craft butchery, but Jackie Wayne Beef Co. Culinary Director Garrett Eagleton says otherwise. Second in command at the local butcher and meat delivery service, Eagleton talks Texas chili, his relocation to Richmond and more meaty topics in our interview. (Richmond magazine)

After making its debut in 2019 and then having to cancel last year due to the pandemic, the plant-based party that aims to promote and diversify the vegan lifestyle is back. On Sept. 11, the Soul Vegan Block Party will host a five-hour event at Chimborazo Park that features a hefty lineup of plant-friendly eateries and vendors including Favour Cookie Co., SoulSmith Kombucha, Nomad Deli & Catering Co., 1115 Mobile Kitchen, and more. Come hungry, and come curious.

On the Farm Again

While their names may be familiar and their produce may be part of your weekly market haul, Real Local RVA’s 5th annual farm tour presents the opportunity to dig a little deeper with some area growers. Mark your calendars for Sept.18 and head to Mechanicsville’s Charlotte Acres — home to Shine Farms, Real Roots Food Systems and Hazel Witch Farm — for an outdoor nosh-and-learn session. Tickets are on sale now.

Get your croissant, cookie and challah on at the recently debuted Up All Night Bakery. The walk-up window from a seasoned pastry chef is open two days a week in Lakeside. (Richmond magazine)

The owner of Salsas Don Sebastian adores arepas and has a soft spot for spaghetti al limone. Learn more about the Venezuela native and mom in our latest spotlight. (Richmond magazine)

Monday restaurant closures can crush those dining dreams, but we’ve tracked down a collection of spots that stay open, and ones to skip, to help start the week right. (Richmond magazine)

Later, ‘maters. Savor tomato season before it’s too late, with a flaky tart recipe from The Roosevelt and tips on picking the ripest of the bunch. (Richmond magazine)

Drumroll, please. The winner of Gearharts Fine Chocolates’ custom flavor contest, a celebration of the chocolatier’s 20th anniversary that garnered a few hundred entries, is Strawberry Chutney. Expect the new bar to drop in coming months. The runner-up choices were inspired, too, with Peanuts and Cola as well as Pear Sangria getting a nod from Gearharts.

For all those welcoming the changing leaves and sweatshirt weather, Starr Hill Brewery is right there with ya. Beginning Sept. 15, the Scott’s Addition rooftop bar will host its annual Fall Fest, five days of food trucks, live tunes and festive brews including Last Leaf Maple Brown Ale.

September is National Suicide Prevention Month, and in a few weeks Longoven’s Andrew Manning will head to Chicago to join chefs Noah Sandoval of Oriole and Ryan Smith of Staplehouse for the third annual dinner to benefit Vibrant Emotional Health, an organization that works with people to help achieve mental and emotional well-being.

A spoof on one of fast-food chain Chick-fil-A’s top-sellers, the Gay-Fil-A chicken sandwich at Carver dive bar and eatery Cobra Cabana recently got a shout-out in Ultimate East Coast Gay Road Trip Guide from Thrillist. Each week a portion of proceeds from sales of the strictly Sunday sammy goes to Side by Side, a local nonprofit that supports Virginia’s queer youth.