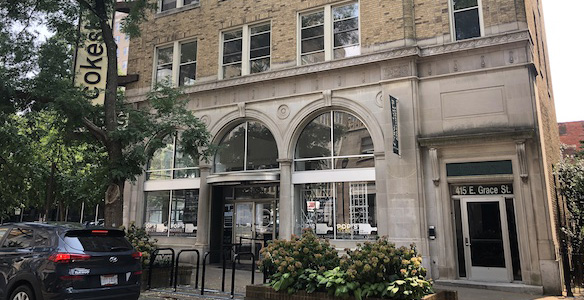 It looks like Pop’s Market will continue on under the tutelage of one of its downtown neighbors.

The market and cafe at 415 E. Grace St., which had reportedly been set to close this month, appears set to be taken over by Kimberly Love-Lindsey and Mike Lindsey, owners of restaurant Lillie Pearl across the street.

The wife-and-husband duo looks to be saving Pop’s from closure after filing an ABC application on Wednesday for the existing Pop’s space using the Pop’s Market brand as its trade name.

Kimberly Love-Lindsey and Mike Lindsey are the owners of Lillie Pearl. (BizSense file)

Pop’s Market has been operating out of the former Cokesbury books building downtown since 2015 under the ownership of son-and-mother duo Josh and Patti Wright. Named for Josh’s late father, the market’s sandwiches on fresh-baked bread and pasta-focused entrees have made it a popular downtown lunch and dinner destination.

But in the spring, the Times-Dispatch reported that Pop’s would be closing sometime this month.

Josh Wright and his mother Patti have owned Pop’s Market since 2015. (BizSense file)

Reached Wednesday, Josh Wright declined to comment on any deal that might be in place. Love-Lindsey and Lindsey couldn’t be reached for comment by press time.

If the Pop’s deal materializes, the restaurant would be a fourth spot for Love-Lindsey and Lindsey. They opened Lillie Pearl last fall at 416 E. Grace St. after years helping lead EAT Restaurant Partners.

In addition to Lillie Pearl, the couple is also opening two locations of their fried chicken concept Buttermilk and Honey — one in Hatch Local, a forthcoming food hall in Manchester, and the other in West Broad Marketplace in Short Pump.