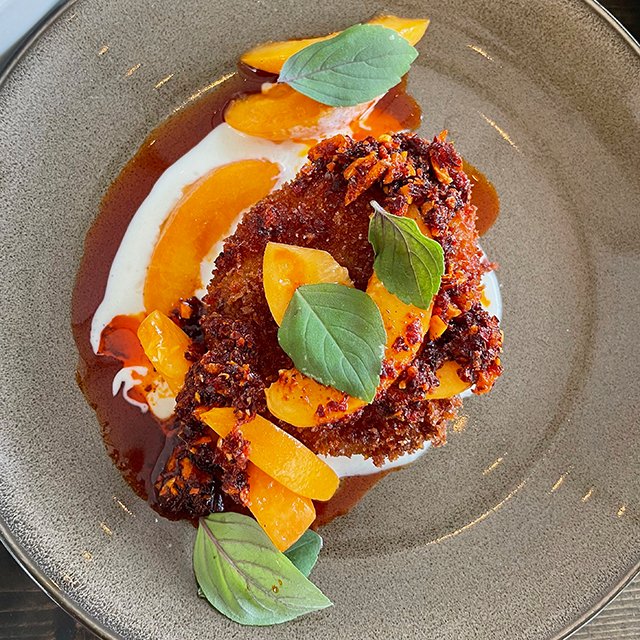 Farmers markets are a special place, and that’s exactly where the owners behind Auntie Ning’s Filipino food truck, Polpetti Italian catering and Column 15 Coffee all originally met. Fast-forward a year, and the trio of food businesses, while still on the farmers market circuit, can be found under one roof at The Market on Meadow. (Richmond magazine)

Best friends and business partners Ezaddin “Dean” Alasad and Faisel Suort have been making big market moves in the past year. Blending big-box grocery store and neighborhood bodega vibes, the duo are responsible for Northside Gourmet Market, a revamp of Oregon Hill’s Fine Food Market and a slew of other shops on the way. Did we mention they’re the largest local distributor of Richmond’s own Nightingale Ice Cream Sandwiches? (Richmond magazine)

Foraging for food is second nature to Petersburg native Corey Bullock. The former Longoven chef recently revived his pop-up series, Euterra, a showcase of his deep-rooted adoration and understanding of the woods, where the menu — which has included a sycamore bark cookie and cicada condiment — is kept secret until after the meal. (Richmond magazine)

Most recently of Can Can Brasserie, the brothers behind Brookland Park Market have reopened their business as a full-service restaurant. (Richmond magazine)

Taking neighborliness to a whole new level, downtown restaurateurs Mike Lindsey and Kimberly Lindsey-Love of Lillie Pearl have assumed ownership of nearby Pop’s Market on Grace after the eatery initially announced its closure. (Richmond magazine)

Whether you like it hot, plant-based or in snack size, we’ve got a killer collection of local fried chicken sammies. (Richmond magazine)

Industry experience and a passion for food are the driving forces behind Twisted Carrot Farm from VCU grad Sarah Hoffman. (Richmond magazine)

Where does Peter Chang like to vacation and what necessities does the celebrated chef keep in his fridge? Head this way to find out. (Richmond magazine)

Closed since the pandemic, the Mamma Zu’s space in Oregon Hill is up for lease for the first time in nearly 30 years. Stay tuned for more coverage about this loss of a Richmond dining institution. (Richmond Times-Dispatch)

Cue “All Night Long,” because the farmers market venture turned brick-and-mortar space Up All Night Bakery has officially announced that it will open its walk-up window on Sunday, Aug. 29. Located at 5411 Lakeside Ave., it will take over the space that housed shuttered juice bar and cafe Pulp.

After unveiling the Manchester edition of Stella’s Grocery last week, the Giavoses have struck again. The Continental Manchester — the sister restaurant to the Westhampton outpost — is now open for a “very soft” first week at 609 Hull St.

“Ben and Jerry’s Clash of the Cones” may sound like the latest release from the Vermont ice cream connoisseurs or possibly a new “Star Wars” spinoff, but in fact it’s an upcoming show from Food Network that stars a Richmond business owner. On Monday, Aug. 16, tune in to catch Rabia “Ruby” Kamara of North Side’s Ruby Scoops in the ultimate flavor competition.

Save the date: Tickets for Real Local RVA’s 5th Annual Farm Tour — a four-hour adventure on Sept. 18 with pit stops at Shine Farms, Hazel Witch Farm and Real Roots Food Systems, along with snacks and tunes — are currently on sale.

Changes are on the horizon at Billy Pie. Starting last week, the Patterson Avenue ’za spot put a pause on Thursday-Sunday takeout service to focus on future plans, which include indoor dining, craft cocktails and some new menu items.

The Fountain Lake concession stand in Byrd Park is now home to a series of rotating culinary concepts, thanks to Richmond Black Restaurant Experience. Each week the gazebo, open from 11 a.m. to 7 p.m., will host a different Black-owned food business or vendor, from Tasty Cuisine by M& D to Cheddar Jackson. Paddle boats, anyone?

For its 10th anniversary, The Local Palate magazine decided to take a trip down memory lane and check in with some previously featured people and places. Flip through the most recent issue to peep a story featuring The Roosevelt, which celebrated a decade in Church Hill in July and has played a big role in igniting the restaurant scene in the city.